Several U.S. senators are seeking new details from Silvergate Capital about its knowledge of FTX’s wrongdoing, according to a Jan. 31 report from Bloomberg.

The senators responsible for the inquiry include noted cryptocurrency critic Elizabeth Warren (D-Mass.) as well as Roger Marshall (R-Kan.) and John Kennedy (R-La.)

According to a letter obtained by Bloomberg, senators asserted that Silvergate did not thoroughly answer their previous questions and said that concerns around confidentiality are “not an acceptable rationale” for the bank’s failure to disclose information. They added that Congress and the public are owed information about Silvergate’s role in the FTX collapse.

Elsewhere in the letter, the senators noted that Silvergate obtained a $4.3 billion loan from the Federal Home Loan Bank — a government-sponsored banking system — following FTX’s collapse in late 2022. They added that Silvergate relied upon the bank as a lender of last resort. The group of senators asked Silvergate how it plans to use that loan.

The same senators previously demanded answers from Silvergate in a similar letter in December. Though Silvergate cited confidentiality rules at that time, it did reveal that its relationship with Alameda Research predated FTX’s founding. It also said that it was reviewing transactions related to both firms. The bank added that it conducts due diligence on its clients, reiterating a statement made to the public earlier that month.

Silvergate has until Feb. 13 to respond to the latest round of questions. It is unclear what steps will be taken if it does not respond, though Bloomberg’s report suggests that senators could go through banking regulators to obtain the requested information. Blur, which debuted in October 2022, landed itself on the map for being a no-fee marketplace geared toward professional NFT traders. In one of its first days, it raked in about 1,160 ETH in trading volume, or over $1.8 million. It soared past competitor marketplaces such as SudoSwap and LooksRare, challenging OpenSea’s top spot.

Bitcoin For The Wealthy, 80% Of Millionaires Want It, Survey Shows Bitcoin is on the wealthy’s wish list. According to recent data, 8 out of 10 high net worth (HNW) individuals have asked for financial advice on adding cryptocurrencies to their portfolios in 2022.

According to the survey conducted by the deVere Group, one of the world’s largest independent financial advisory, wealth management, and fintech organizations. The data shows that more than 80% of its clients, with more than $1 million and $5 million in investable assets, have requested advice on cryptocurrencies as an investment vehicle.

Nigel Green, CEO and founder of the deVere Group, noted that the cryptocurrency market in 2022 had its worst performance since 2018, with the “headline-grabbing” market leader Bitcoin falling during the year.

Amid this economic crisis, investors reduced their exposure to risk assets’ volatility, including traditional market stocks and cryptocurrencies, due to rising inflation and paused economic growth.

Green noted that despite the crypto winter, high-net-worth individuals seek financial advice on Bitcoin and crypto from financial advisors to expand their investments and portfolios.

Nigel Green, founder of the deVere Group in 2002, currently with more than $10 billion under management and over 80,000 active clients in more than 100 countries, noted that this conservative group of investors was not scared by the bear market and adverse market conditions.

Instead, the conservative group of HNW individuals is looking to either start or increase their exposure to cryptocurrencies. According to Green, these individuals understand that Bitcoin and digital currencies are the future of money, and they “don’t want to be left in the past.”

The financial advisory group also noted in its survey that in recent months, major financial institutions such as JP Morgan, Fidelity, BlackRock, and New York Mellon, among others, have begun offering crypto-related services to their clients.

The deVere Group founder also believes that this momentum of interest from investors and financial institutions will continue to build as the crypto winter of 2022 thaws and the sector begins to recover.

Green also noted that Bitcoin is on track for its best January since 2013, based on hopes that inflation has peaked and that the economy is finally showing signs that inflation can take a different path.

Nigel Green believes that monetary policy may become more supportive and that the various crises in the crypto sector, including high-profile bankruptcies, are now in the rearview mirror.

According to the CEO of deVere Group, Bitcoin has risen over 40% since the turn of the year, and this will not go unnoticed by high-net-worth clients and others looking to build wealth for the future.

If HNWs were expressing such huge interest in the 2022 bear market, as market conditions steadily improve, they’re going to be amongst the first to capitalise in the forthcoming bull run.

Bitcoin is trading at $23,100 as of press time, up 0.8% in the last 24 hours after leaning into support. It’s slightly in profit in the last seven days with 0.6%, with expectations of the upcoming Federal Open Market Committee (FOMC) meeting brewing in the crypto market.

Intain’s digital marketplace is intended to automate and integrate functions such as verification agent, underwriting, rating agency, servicer, trustee and the investor, according to the company. “Rather than replacing trust intermediaries, [IntainMARKETS] integrates them onto a singular platform and process to enable digital issuance and investment on-chain,” the company added. The vote was technically a “signaling” proposal, meaning its passage does not automatically install Wormhole as Uniswap’s official BNB bridge. Instead, the outcome means Wormhole will be written into an upcoming, official proposal to deploy Uniswap v3 on BNB chain. 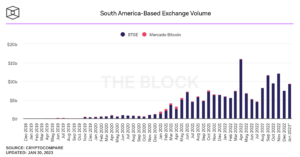 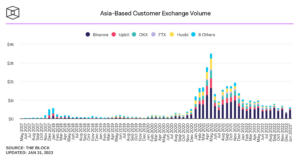 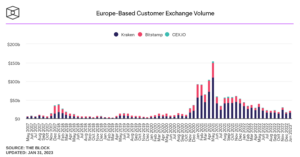 Exchange volume by region per month is an important metric for several reasons:

The region’s growth is being led by BTSE, a British Virgin Islands-based exchange founded by Jonathan Leong in 2018. Bitcoin (BTC) mining firm Greenidge said it lost about $130 million during the fourth quarter of 2022 while earning just $15 million, according to a Jan. 31 statement.

The BTC miner was one of the several companies that had a difficult 2022 due to the challenging market conditions.

Greenidge added that it sold its subsidiary, Support.com, for $2.6 million on Jan. 17.

Reduces debt with NYDIG to $17 million

Greenidge said it transferred the rights of certain miners and some unnamed credits and coupons to NYDIG. The transferred assets reduced its debt by approximately $59 million.

The Bitcoin miner added that it could further cut its debt by $10 million if it can help NYDIG secure the rights to a mining facility within the next three months.

Greenidge revealed that it entered into a five-year hosting agreement with the lender, adding that the deal  contains a “profit-sharing component.” The agreement terms would also see NYDIG pay a hosting fee that covers the cost of power and the management of the mining facilities.

Despite this new restructuring, Greenidge still owns “10,000 miners with a capacity of approximately 1.1 EH/s.”

Restructures another $11 million in debt

The struggling BTC miner further revealed that investment bank B. Riley Financial has agreed to restructure an $11 million promissory note.

Greenidge said it would make a principal payment of $1.9 million to B. Riley, and no further payments are expected on the notes till June. However, if the miner can pay  $6 million of its debt before June 20, B. Riley agreed to cut its loan repayment to $400,000 monthly from the current $1.5 million.

Greenidge added that it wants to sell excess real estate from its South Carolina mining facility to repay part of the promissory note.

The miner would pay an amendment fee of $1 million to B. Riley with its stock option. Besides that, the investment bank and an affiliate of Atlas Holdings will purchase an additional $2 million of Greenidge’s stock.

“The debt restructuring we’ve announced today significantly improves our balance sheet and provides us with a clear path forward as we enter 2023… These agreements have effectively reduced our secured debt balances with these lenders from approximately $87 million to approximately $26 million and have the strong potential to allow us to further reduce our debt.” Anton Shkurenko, whose co-founder Anatoly Legkodymov was arrested in the law enforcement operation along with several other Bitzlato executives, said police had seized the platform’s hot wallet, which contained about 35% of user funds in all cryptocurrencies at the time.